Here is a true story about the astonishing love of God.

There is only one God and he has always existed in three persons: the Father, the Son and the Holy Spirit.

He has expressed himself by creating the whole universe out of nothing. The world he made was very good and every part worked together to bring God glory. People are the pinnacle of God’s creation; he made them in his own image, with great dignity and significance. But people decided that they didn’t want to go God’s way and they rejected his loving rule. God’s response to this rebellion is anger; anger at the way this ruins his perfect world, including the people who rebel, and also because it takes away from God’s own glory.

The Bible tells us that anyone who calls on the name of Jesus for forgiveness will be saved.

But God’s love for his own glory meant that he didn’t destroy the world and start again. God began to work out a plan to put everything right. God’s plan was a plan that came with great cost to himself. God is perfectly fair and loves justice; therefore, all rebellion against him must be fairly punished. So God came to live on earth as a human being - he was given the name Jesus and he is really human and really God. He lived in a way that amazed people: he never did anything wrong, he taught with authority, he healed the sick, he raised the dead, he forgave sins. Some people couldn’t handle this so they killed him by nailing him to a cross. This was all part of God’s plan. When Jesus died he stood in the place of guilty rebels and he took the punishment that they deserve. But the cross wasn’t the end for Jesus. Amazingly, God raised him to life again after three days and he was seen by over 500 people; then he went to sit at the right hand of his Father in heaven. 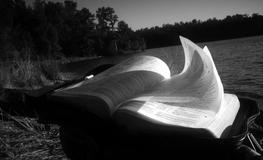 The Bible tells us that anyone who calls on the name of Jesus for forgiveness will be saved. This means that they share in the life of Jesus; and God considers them as pure as Jesus because he died in their place. All who are saved have been given the gift of the Holy Spirit who enables this new life to be experienced. This is what it is to be a Christian.

All Christians are part of the family of God. This family is called the Church and has been given the task of telling all the world about what God has done in Jesus.

One day Jesus has promised that he will return to earth and when he does he will decide the final destiny of all people. Anyone who has continued to reject Jesus during their life will be rejected by him; they will suffer eternal separation from God’s love and care. But anyone who has trusted him will be raised to a new life in a new perfect world. This new world will be free from pain and suffering. It will be a place where people and God live together in complete happiness.

This story has been outlined clearly to us in the Bible (the Old and New Testaments) which we take as the authoritative Word of God. A list of our core beliefs can be found here. We think that this list of beliefs is crucial to understanding the faith. These beliefs, when lived out, should result in mutual love, acts of service, and concern to tell others the good news about Jesus Christ.

Touched by the Hand of God

Plus ça change… Stalingrad and us.

Verse of the Day

Lookup a word or passage in the Bible
e.g. Acts 2:1-2 or Pentecost